The Art of Loose Drawing

What exactly is “Loose Drawing” and how does one loosen up?

For me, what comes to mind when I think of drawing loosely, or loose sketches, is a feeling of fluidity, a sense of overall form and shape, and evidence of the motion of the artist’s body when they put lines to paper. Loose drawings, or loose sketches need not be sloppy, or recklessly made, they can have a sense of accuracy to them, while retaining a freshness, an organic quality, a sense of humanity.

When approaching drawing I try to keep in mind that what I am doing is abstracting from what I see and not copying it. All two dimensional images, including photographs are abstractions. They are flat, selected pieces of the world, and are unreliable narrators of a story that is impossible to describe in its entirety. This quality, of being abstract, and being unreliable gives them the freedom to veer from what is seen, to allow the world to be filtered through the eyes of a person, with wants, hopes, failings, and a unique point of view. Whether you are practicing Fine art, commercial art, or sketching for your own pleasure, loosening up your drawing can help you. 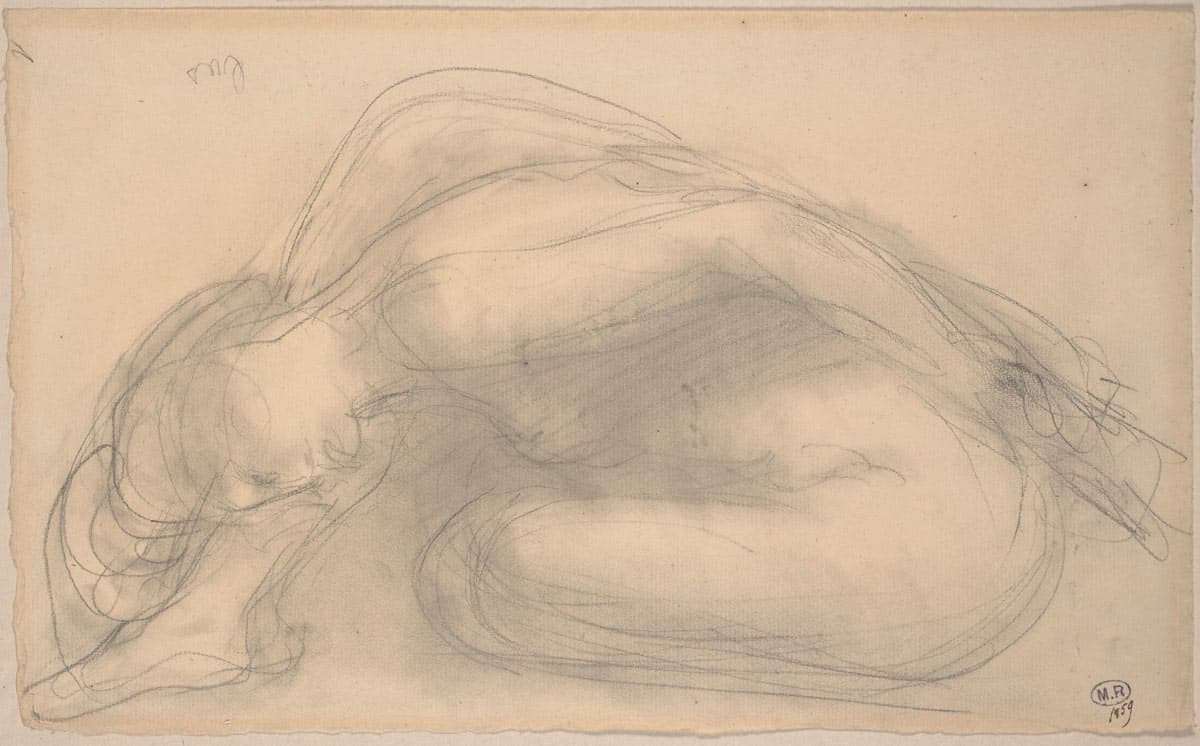 The first artist who comes to mind when I think of loose drawing, isn’t one known for his drawings or paintings, but instead for his sculptures, Auguste Rodin. Rodin’s sculptures are solid, fluid, sinewy even. They are full of vulnerability, sorrow, ecstasy, passion, and the deepest struggle. They have a weight to them, they are defined. Though he made drawings with the same weight and gravity of his sculptures, many are light, airy, rich with movement and gesture, and for what they lack in detail, they make up for in fluidity. Some are imprecise, while others contain an exactness, while retaining a thin, sensual, barely visible outline. My favorites are those where Rodin combined line and faint watercolor washes. They are the epitome of sensuality realized in two dimensional space, as erotic as any works by Gustav Klimt or Egon Schiele, both masters of fluid, eroticism in their works.

Pursue your Career with an Illustration Mentorship

Learn from award-winning illustrators, build your skills, and develop a career-ready portfolio
Get Started 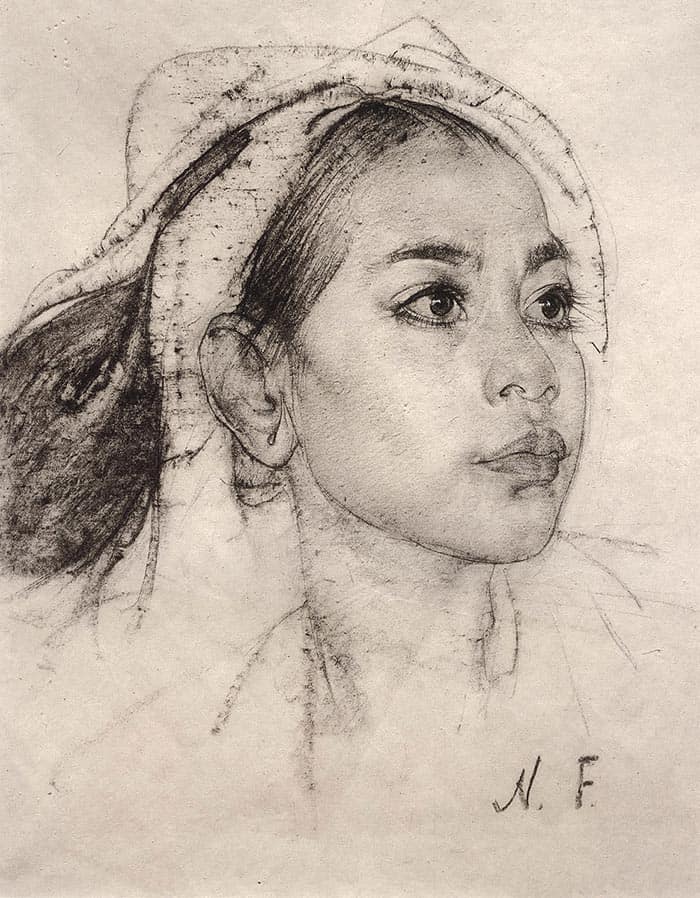 Nicolai Fechin, 1881 to 1955 was an amazing draftsman, whose drawings feel at once to be accurate and exaggerated. His forms are held together by his keen understanding of value, while his mark making was both precise and expressive. Primarily a portrait painter, his subjects would often be contained by the most delicate of lines, as evinced in this portrait of Boris Karloff. In his drawings and paintings, he combined a sense of accuracy and containment with an expressive, abstract energy. 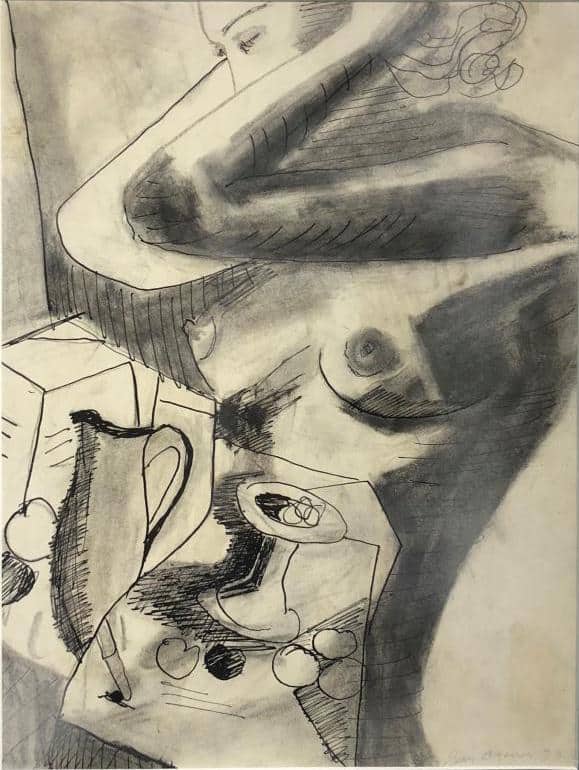 Joan Brown was part of a group of artists often referred to as the Bay Area Figure Painters. She created incredible works that combined line, paint, collage, and a deep understanding of shape language and space. This deceptively loose sketch, combining multiple views in a single space shows both her understanding of shape and form and her fluid approach to drawing. 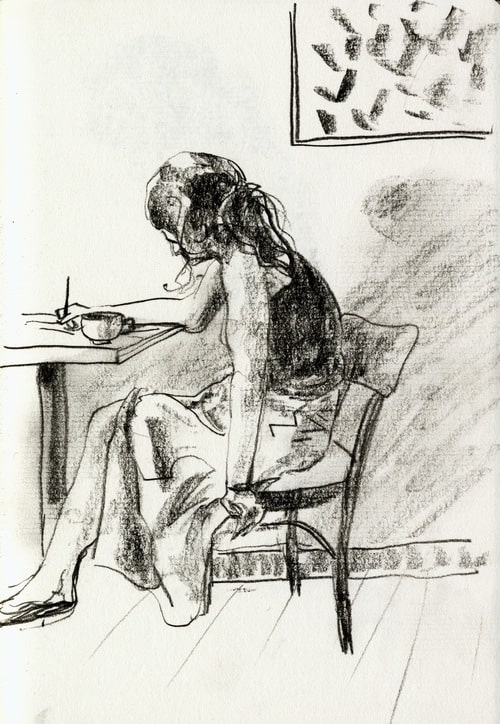 To watch George Pratt draw, whether it be with crayon, pastel, or gel pen, is to watch someone who is both a master of observation, and of making lines dance on paper. There is a fluidity (there’s that word again) to George’s line. I have seen him begin with a shoulder, draw around a figure, and finish with the top of the head, while never seeming to lift his pen. Anytime I feel myself tense up, or feel rigidity in my drawing, I think of George, and the times we’ve spent drawing together. In addition to his line drawings, George has stretched himself by using materials that allow for little control such at putty knives and paint rollers. Through his experiences drawing alongside masters such as Mark English and Gary Kelley, he had expanded his oeuvre to include chalk pastels and shape centric drawings, where outline is rarely, if ever used. I wish I drew as well! 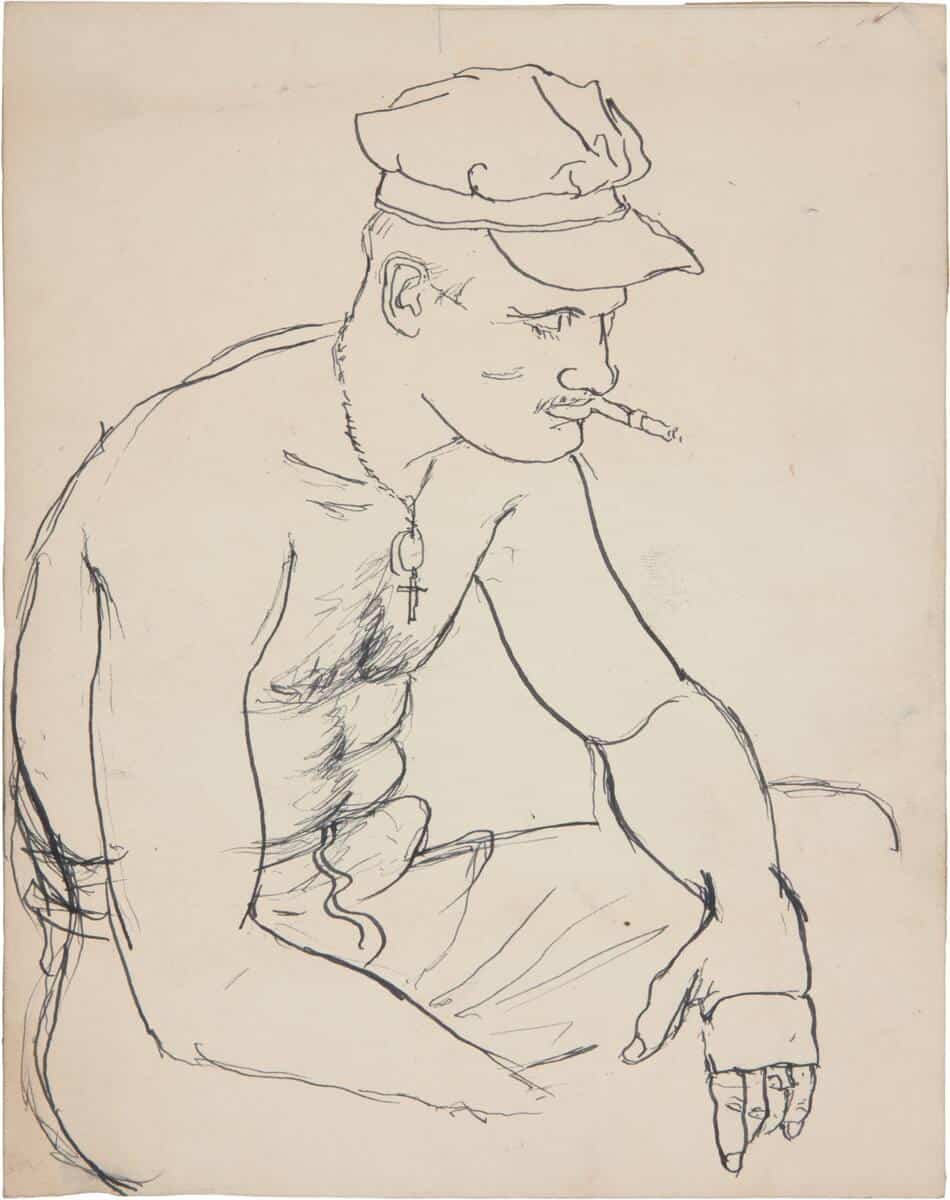 Back To The Question, What Is Loose Drawing?

As I write this, I notice certain adjectives repeating, fluidity being prime among them. What is this fluidity I speak of? I am tempted to say that I know it when I see it, but that would be unfair and unhelpful. First, I want to say that whether one is sketching loosely, or building a picture up slowly, and with precision, one approach isn’t better than another. There are many artists who build an image up by filling a page with small, solid mark making, and create works that I find beautiful. Looking at the end product I find it impossible to tell how they made the image, where they began and where they finished. Watching any skilled artist draw or paint is the closest I’ve found to watching a magic trick performed, seeing behind the curtain and knowing how it was done, and being even more amazed at how incredible the magician is. On the other hand, there are artists whose work you look at and what you experience is not only the finished drawing, but evidence of the journey. This is something I find very liberating, as if, because this master did this, it makes it an acceptable approach, and, I feel less alone in my own journey because I see the work of someone who has been down the same roads I’m traversing.

Fluidity, in my mind is a sense of connectedness in a line, a feeling for roundness and an allowance for a bit of exaggeration, or lack of strict fidelity to a subject, while retaining enough of the subject to suggest, rather than define. Another term I feel is relevant is sensuality. I see this as a sensitivity to forms, as an understanding of the need for both angular and undulating shapes, a lightness of touch. Expressiveness is energy come to life on a page, a sense of containment and release, and the interplay between the two. This sketch by Kim Frohsin contains all of these qualities, combined with a love of movement and gesture. 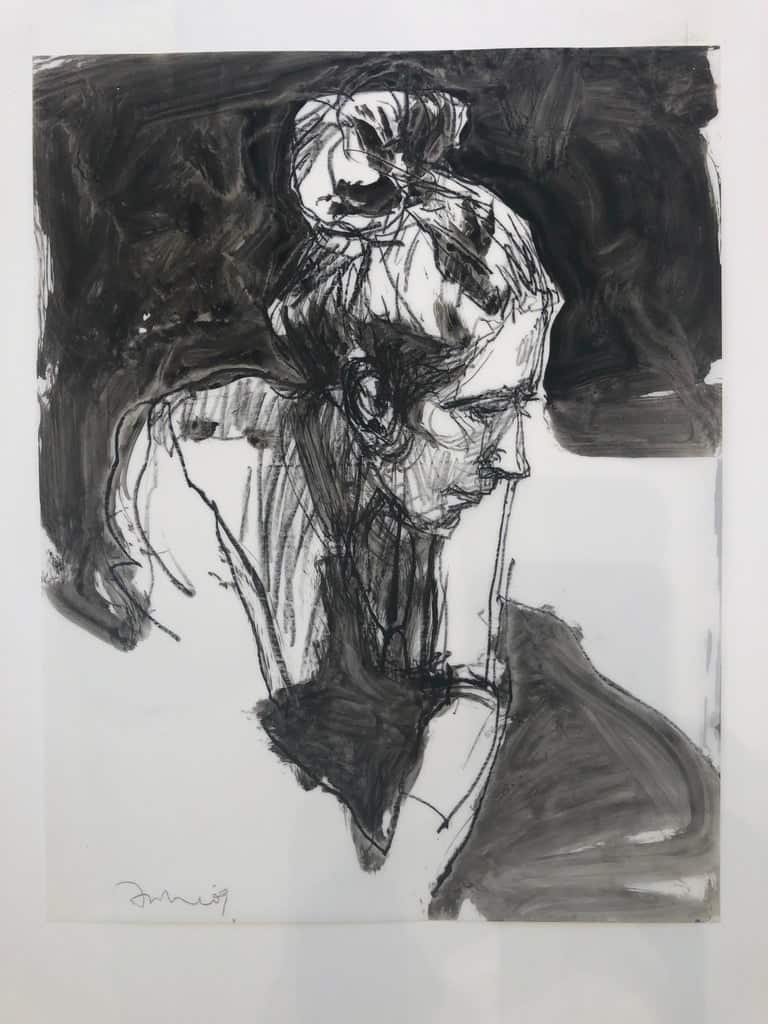 One would be hard pressed to find two artists as talented and as opposite as Jean-Auguste-Dominique Ingres and Ferdinand Victor Eugène Delacroix. Ingres work was stillness and fidelity to form, while Delacroix leaned toward a sense of animation and drama. I love the work of both, but they were on opposing sides when it came to drawing and painting.

Join us for Drawing from Photo Reference Every Thursday 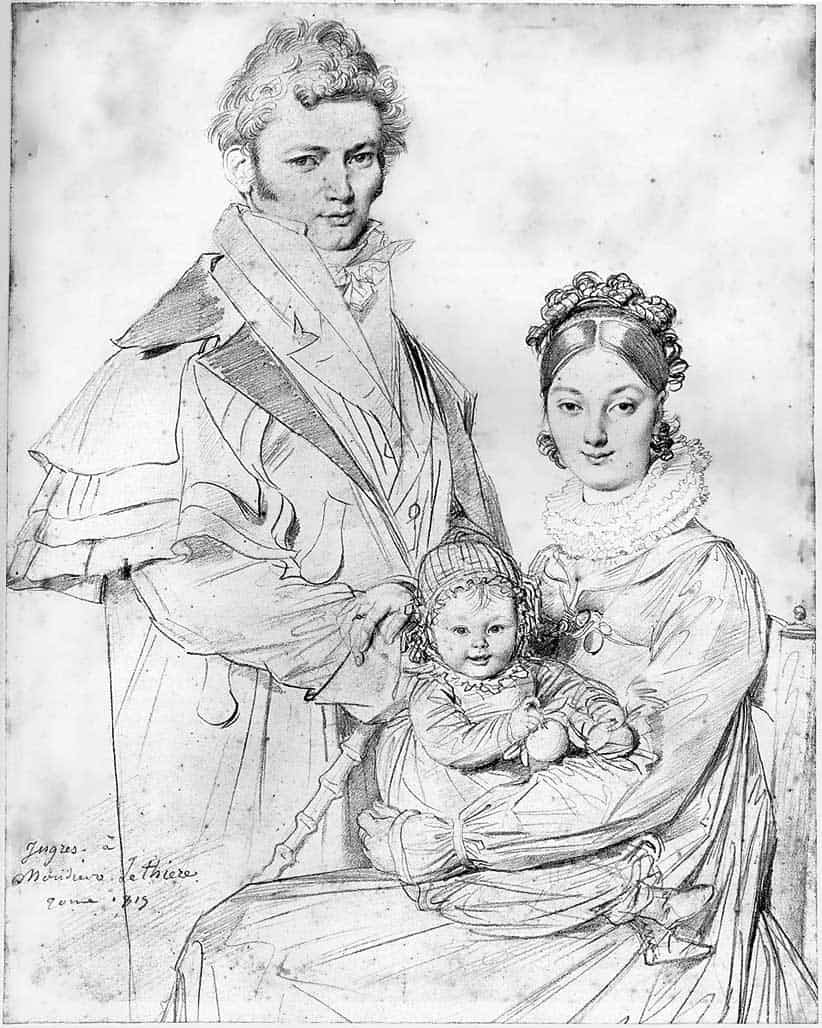 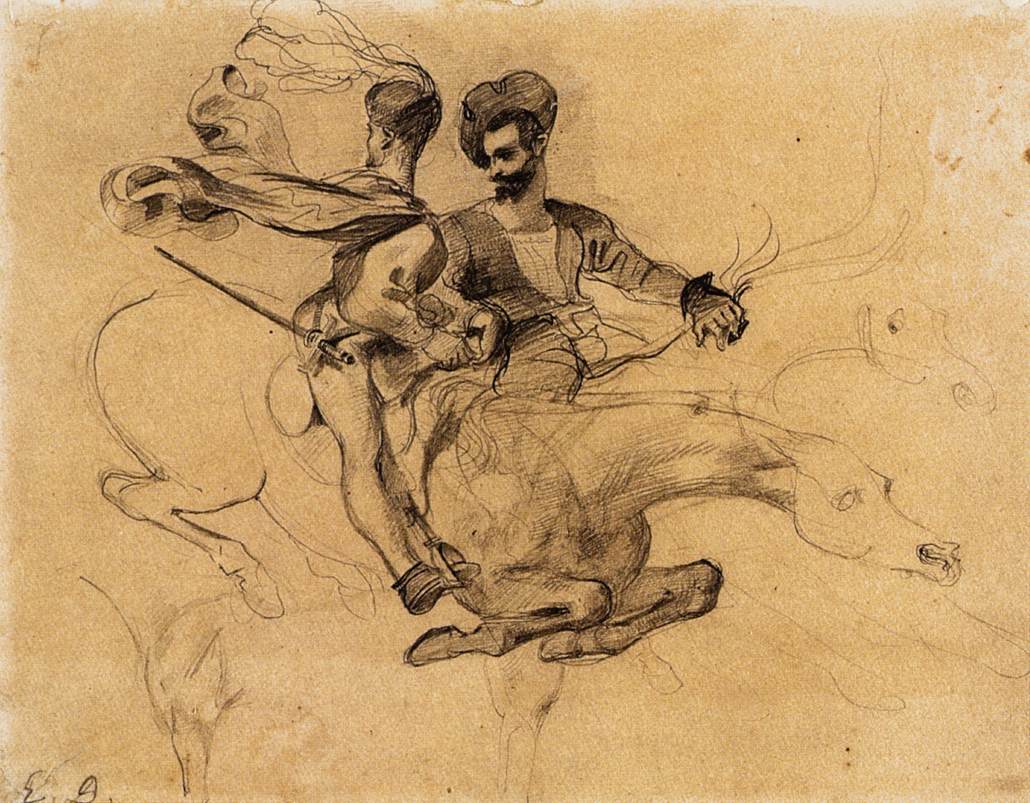 I find the work of both Ingres and Delacroix to be beautiful and captivating. Ingres for his sense of light and form and sensual forms, and Delacroix for his loose sketching, expressiveness, color, and expression of drama. What I find most interesting is how these two giants influenced the works of Edgar Degas, an artist who began in a neoclassical mode and transitioned to a graphic expressiveness. I see the tension and release in Degas as his academic beginnings give weight to he looser outlines and the variety in his mark making. 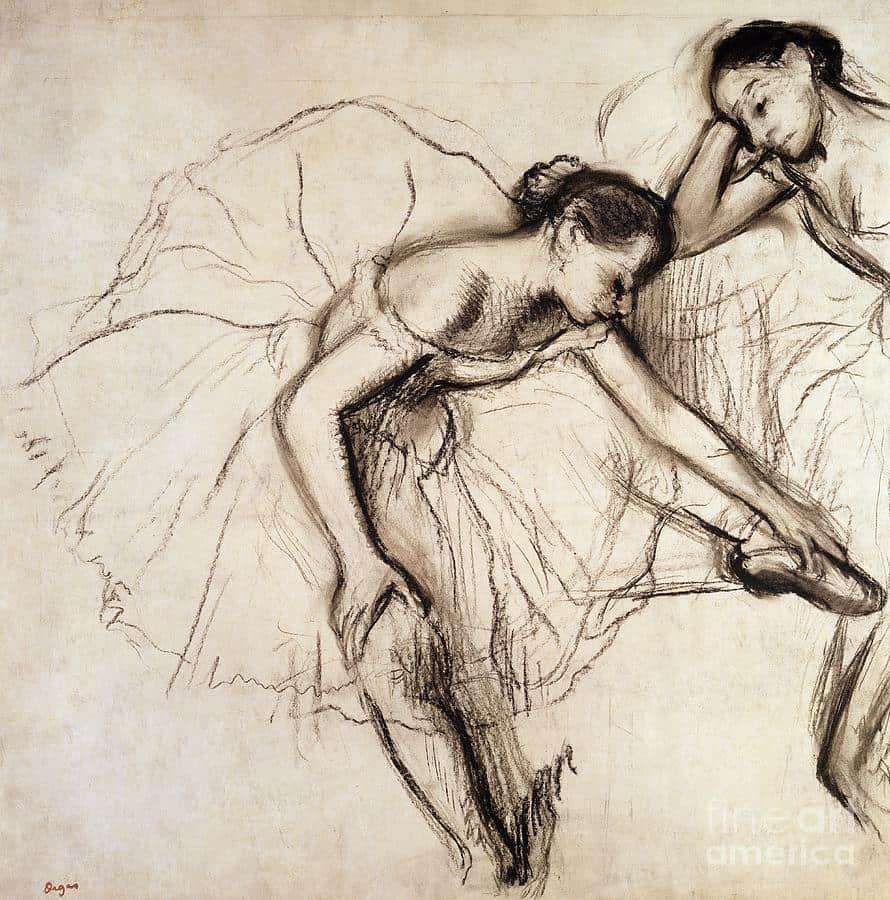 Perhaps it is all in one’s attitude as to whether a drawing is loose or tight. I will often pick up a pen, move it across a sketchbook page and not know where it’s going or what I’m making. My hand and arm are relaxed, I’m drawing from my shoulder, and my attitude is relaxed and comfortable. Overall design takes precedent over individual details, and a sense that I’m coloring outside the lines gives me great comfort. There are other times when I am not relaxed, I’m seeing that things aren’t going well, I’m trying to capture a thing but its elusive, and I don’t have the skills to accomplish whatever task I’ve set for myself. This happens sometimes when doing demonstrations. I and other artists I know call this crashing and burning. 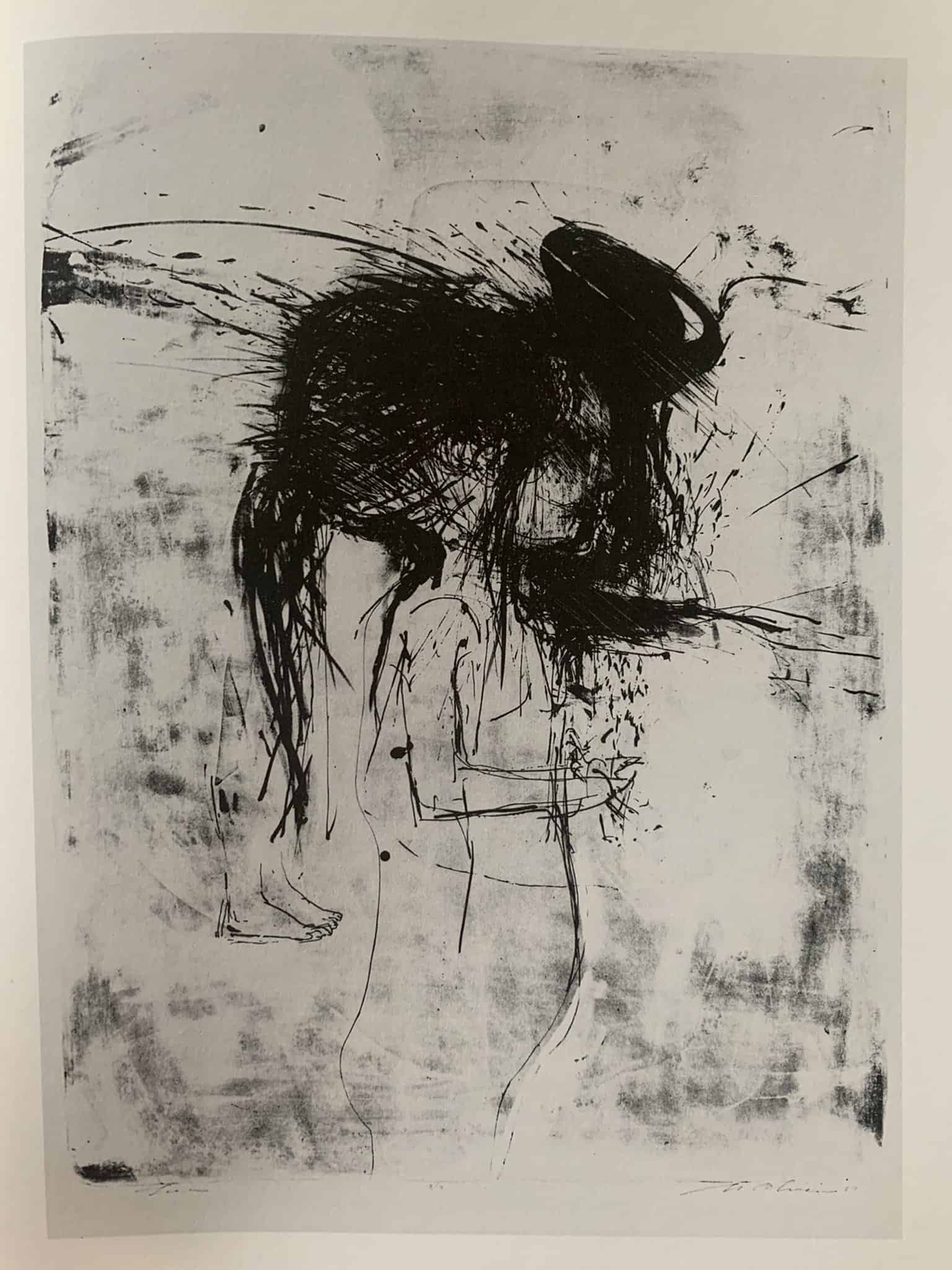 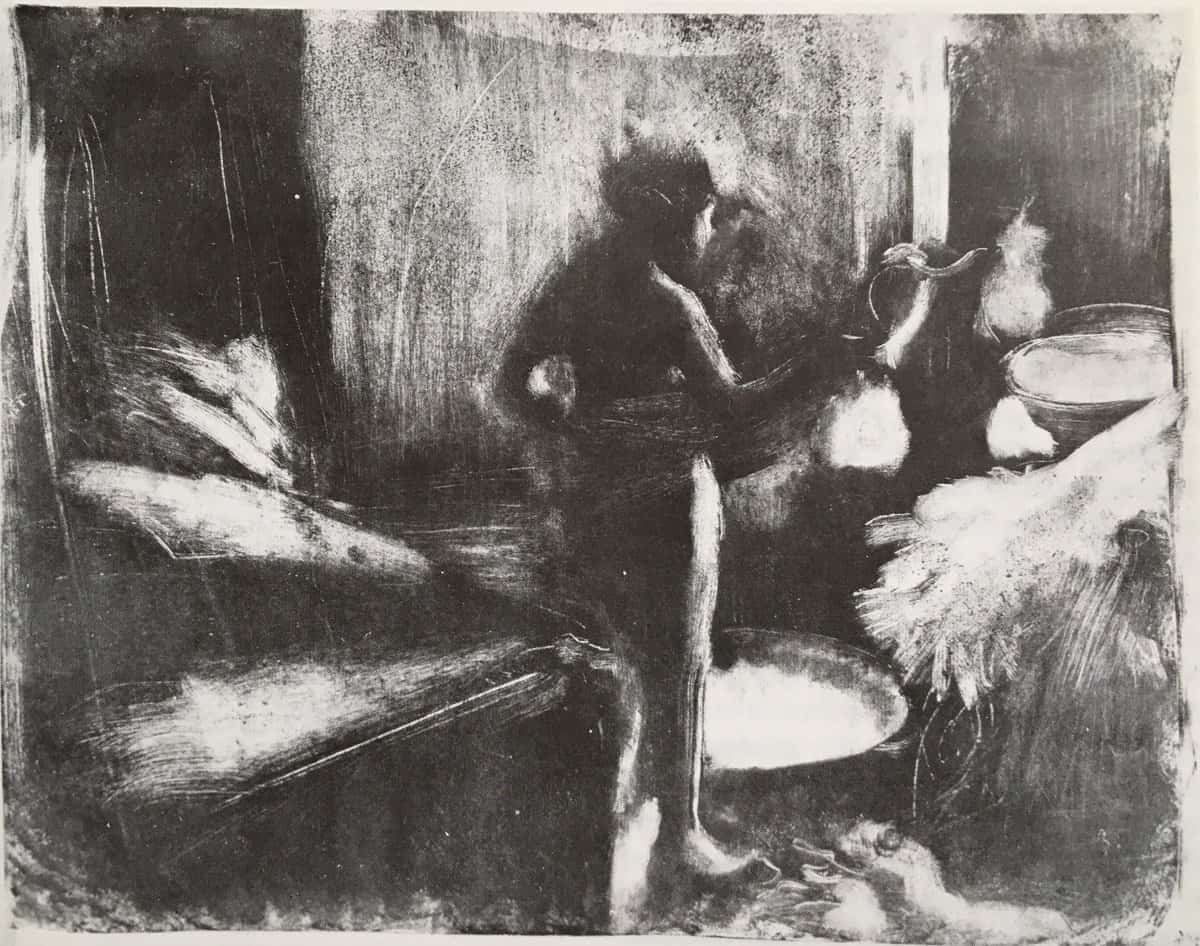 When I was in art school I took an etching class. An etching is a print made by engraving lines and marks into a metal plate, or into an acid resistant ground, and after immersing it in acid, embedding ink into the grooves etched into the plate, while wiping the surface of the plate clean, then printing it. To make an etching, especially an acid etching was an involved process. Some time later I discovered mono printing, or making monotypes. This process involved painting onto the surface of a metal plate with ink or oil paint, working quickly before the paint dries, and making a single print by running the plate and paper through a press. It’s a process that invites looseness, working quickly, and seeing results that are the reverse of what you intended. The surprise factor is one that keeps me coming back to printmaking again and again.

Ways To Loosen Up Your Drawing

In approaching drawing I find that if I elevate my pinky, and use my shoulder to draw with, my lines are more fluid, less jutted or hesitant, and I have an eye out for the overall picture than when I try to draw with my fingers. Elevating my pinky turns the remaining fingers into a kind of clamp and allows me to use my whole arm while drawing.

I often utilize an approach that could best be described as stop and go. I typically use a gel pen or felt tip and put my pen down in one spot, look for shapes, see where there are changes in direction of a shape or intersection of two shapes, and draw from one juncture to the next, look up again, and draw from that point to the next. This approach is a combination of dot to dot and blind contour drawing. In blind contour, one puts a drawing implement to the paper, and moves it along the surface, echoing what their eyes are seeing as they look along the outline of a shape. 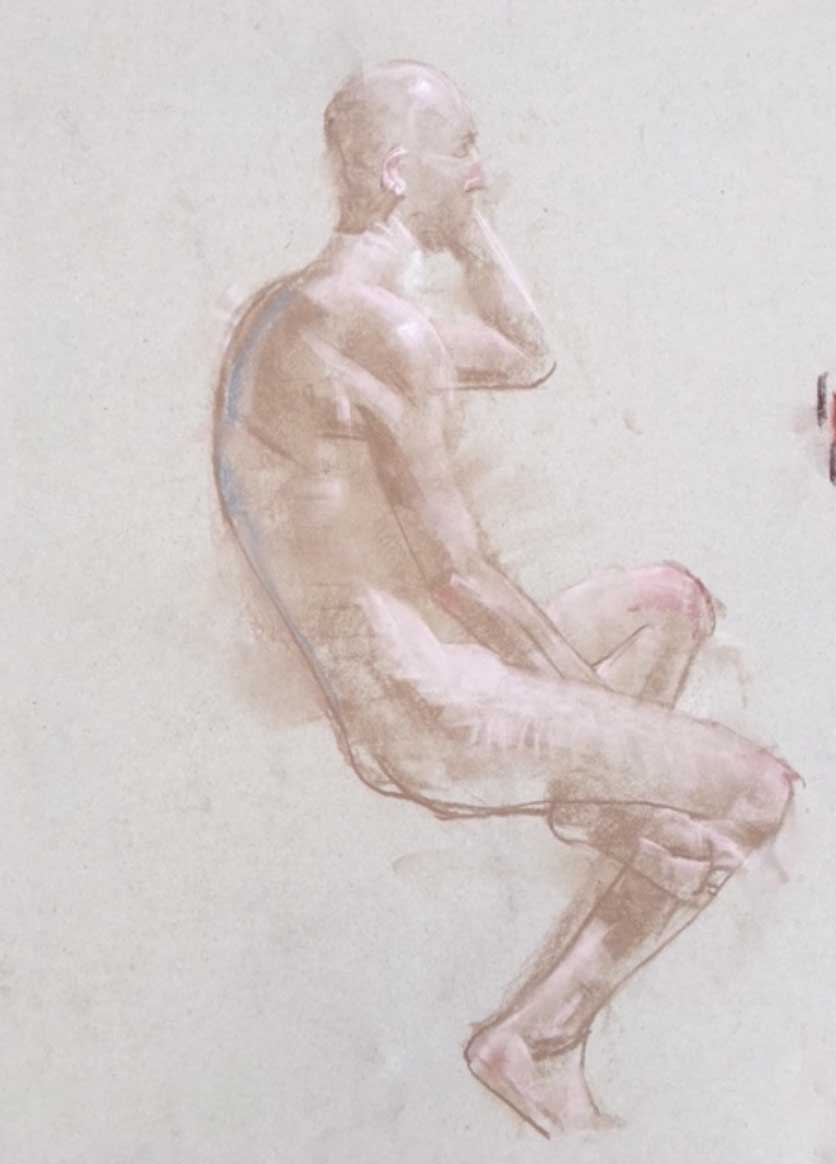 Another great approach is to draw the shape of a figure as a silhouette, fill it in completely with a value, then, identify the darks, and try to see the shapes in what you’re drawing. This is the beginning of a method created by Mark English: https://visualartspassage.com/blog/life-drawing-exercise/. I’ve adopted this approach at times, as have many talented artists, including Sterling Hundley, Jon Foster, John English, and many others. I’ve found it to be an excellent approach to identifying shape and using value to explain it.

There are many approaches to drawing loosely. The thing I would emphasize the most is to remember two things: one, to see the overall subject as a collection of shapes, and two, to keep in mind that the subject you are drawing is there to support your picture, and not something you need to copy verbatim.

Want to join the discussion?
Feel free to contribute! 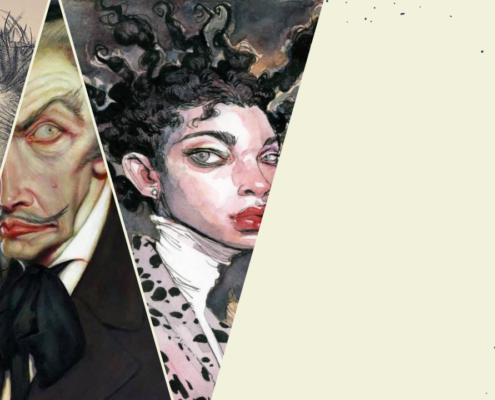 1 Comment
/
June 27, 2022
How do you get your first job? What are the most common mistakes artists make? What art should be in my portfolio? This Q&A-style lecture covers everything there is to know about developing your portfolio, building your skills, and professional strategies to pursue a career in illustration.
END_OF_DOCUMENT_TOKEN_TO_BE_REPLACED 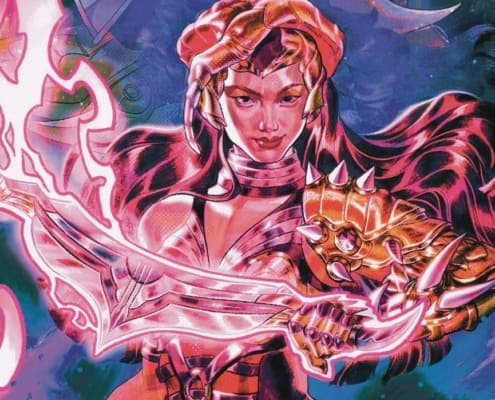 Keyla Valerio
3 Comments
/
April 25, 2022
Comic book artist, Keyla Valerio explains how to pick a palette, the importance of color profiles, & how to bring balance to your piece
END_OF_DOCUMENT_TOKEN_TO_BE_REPLACED 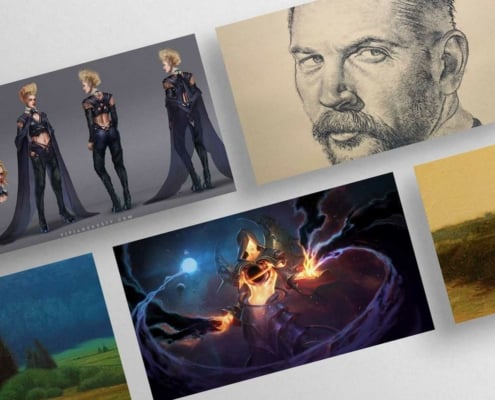 0 Comments
/
April 18, 2022
From editorial and publishing to the entertainment & game arts industry, we're going to explore the makeup of a head-turning art portfolio.
END_OF_DOCUMENT_TOKEN_TO_BE_REPLACED

No Fields Found.
The Future of Reference for the Modern Illustrator