How to Make Walnut Ink at Home

My husband thinks I’m half crazy, he believes next I’ll be dipping my own candles, but it brings me great joy to figure out how to make something myself that I could easily buy.  If there’s a long way to do something, I’d happily hop on board and choose that way.  I love stewing in the process, it relaxes me when I get stressed. Walnut ink is easily available to purchase for about $10, but I wanted to learn how to make it on my own.

It all started last year when I saw the artist John Walker (Instagram: @walkerbrushworks) post a story about making his own batch of black walnut ink.  His drawings that came from it were beautiful. The drawing ink has a gorgeous deep sepia tone/brown quality, and the ink color reminded me of drawings from the Renaissance era.

Before seeing John’s post, I hadn’t realized that it was relatively simple to make walnut ink; and where I live in Richmond Va, there are black walnut trees all over the place.  I messaged John for tips and tricks, which he graciously shared with me, and then I read up on some other techniques so I could make my own walnut ink.

If you have walnut trees around you, they start to fall off the trees between mid-September thru October so now is the perfect time to make ink.  First off collect walnuts. I have a friend who has a tree near her so she kindly collected about 30 nuts for me off the ground.  You want them to be still in their in their walnut husks which are green and slightly sticky.

When I got them, I threw them in a pot, put a lid on, and let them sit there for about a week till they were soft and had turned mostly black, totally fine if they start molding.  At this point, while wearing gloves you can separate the walnut husks from the nut or keep them whole.

If you want to separate them now, you can stomp on it to break the walnut open easily.  Definitely do it outside though because the dye that comes out will stain.  I choose to keep them whole and I separate them later. 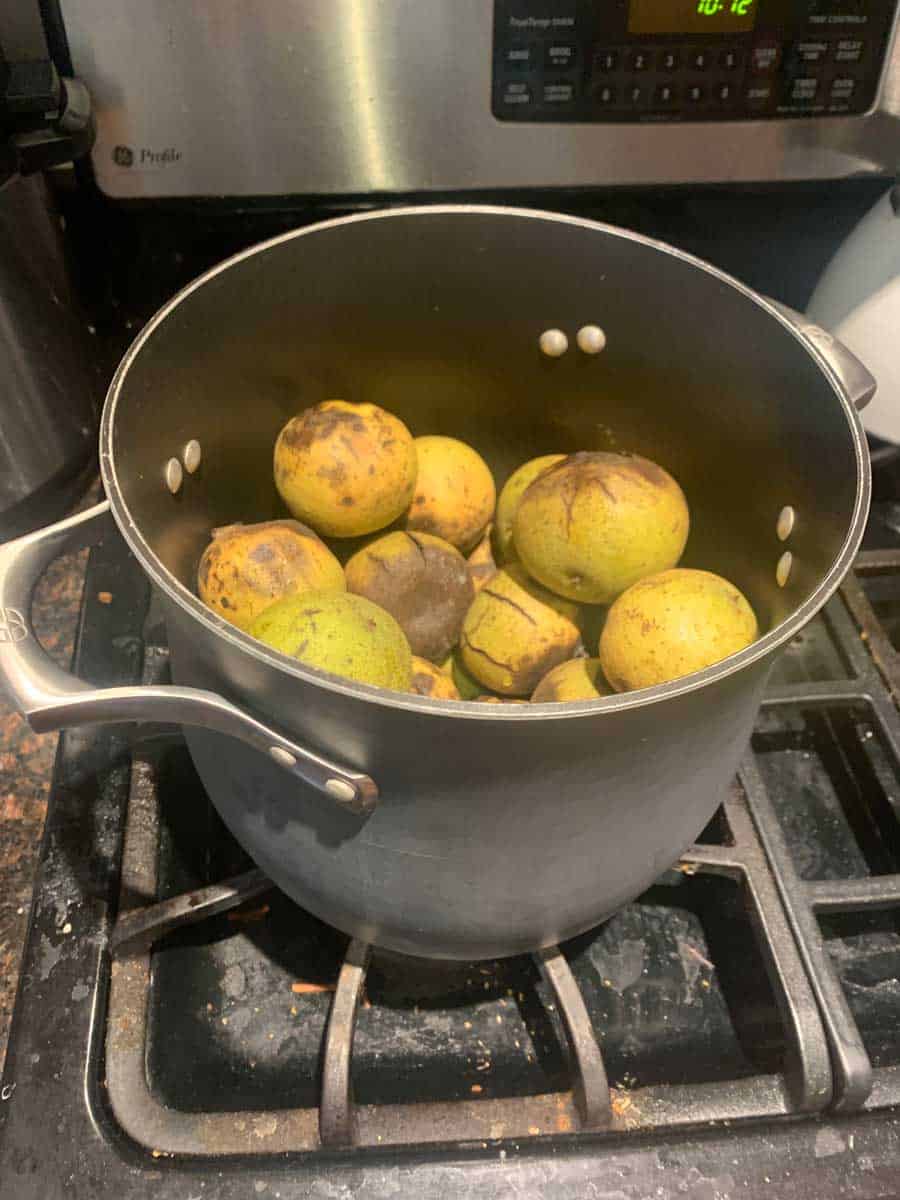 Here’s the walnuts I sourced for this project. 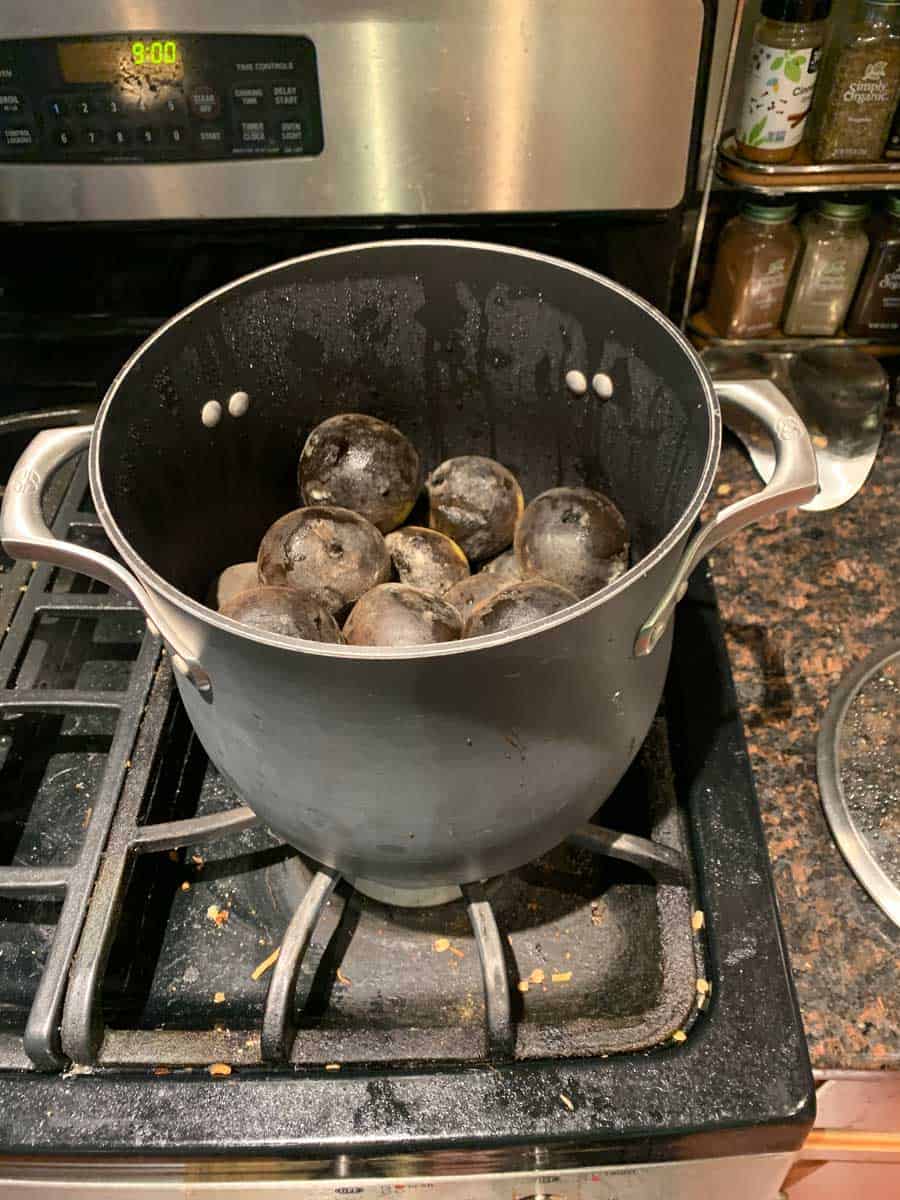 This  is what the walnuts looked like after a week of sitting in the pot with lid on.

Preparing and Separating the Walnuts from the Husks

Next, with your husks or whole walnuts with the husks on in a pot, fill with just enough water to cover the nuts, put the lid on, then set it on the stove to boil.  Once it comes to a boil bring the heat down to medium low so that you have a good simmer. Then let it to continue to simmer for 6-8 hours.  I checked it ever so often to make sure not too much of the water had evaporated, if it did, just add more water.

After this time, turn off your burner, and cool. Using a slotted spoon I pulled out the nuts and put them in a strainer over a bowl and then while wearing gloves I separated the husk from the nut if you haven’t already- this is really easy to do and the husk will crumble and slide off. Throw the husk back in the ink water you’ve been making and discard the nuts.

I also took a potato masher and mashed the husks a bit in the water.  Put the lid back on your pot and let it steep overnight.

*If you separated the nut earlier, then just leave the lid on and let it cool and steep with the husks overnight. 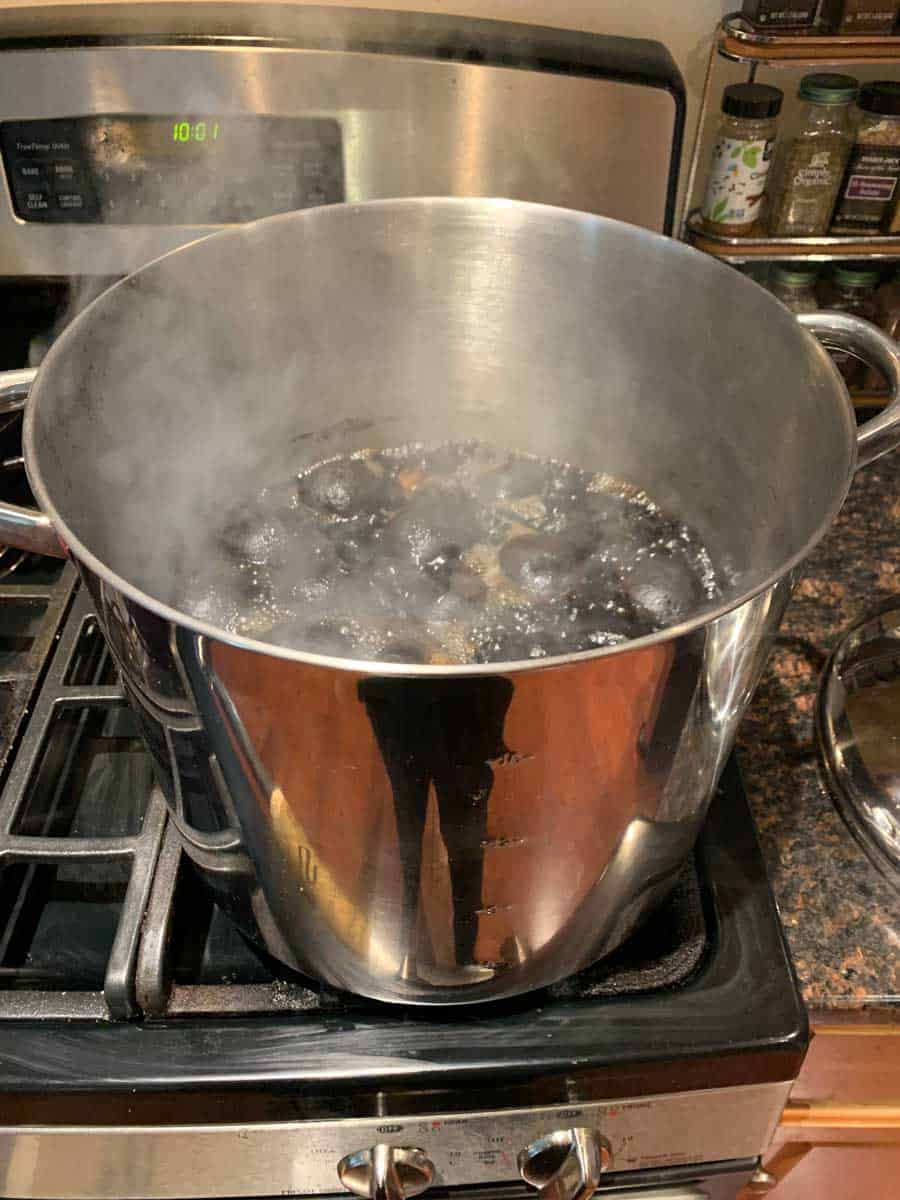 The process of boiling the walnuts 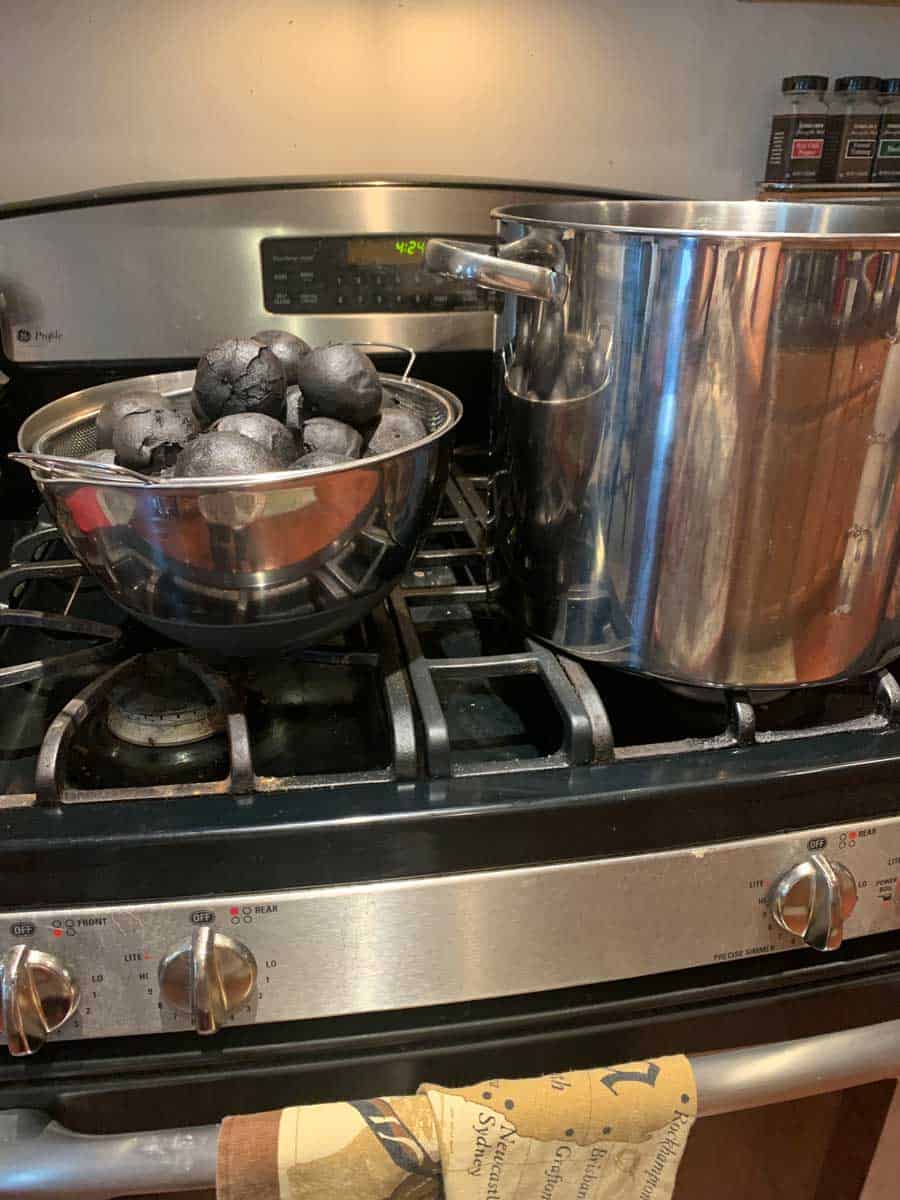 The walnuts in the colander right before I separated the husk from the nut.

The next morning, line a strainer with cheese cloth and pour you ink over the strainer to get all of the husk and sediment out. Gather the cheese cloth with the husk in it and squeeze out all the dye you can. Definitely wear an apron or else be prepared for your clothes to be stained.  You may need to do this in batches to get through all of the husk.

Pour your ink back into the pot and bring back to a simmer. Let the ink reduce over the next 1-2 hours until it’s more concentrated, dark and somewhat thick, and at least half of what you started with.  At this point, you can grab a paint brush and dip in along the way and check on paper how the color is looking.  I did this every 30 minutes.

*With your husk that you’re finished with, I would recommend that you just throw it away and not try compost it unless you research how to do it properly, the husk has a toxin in it that can be bad for your plants. 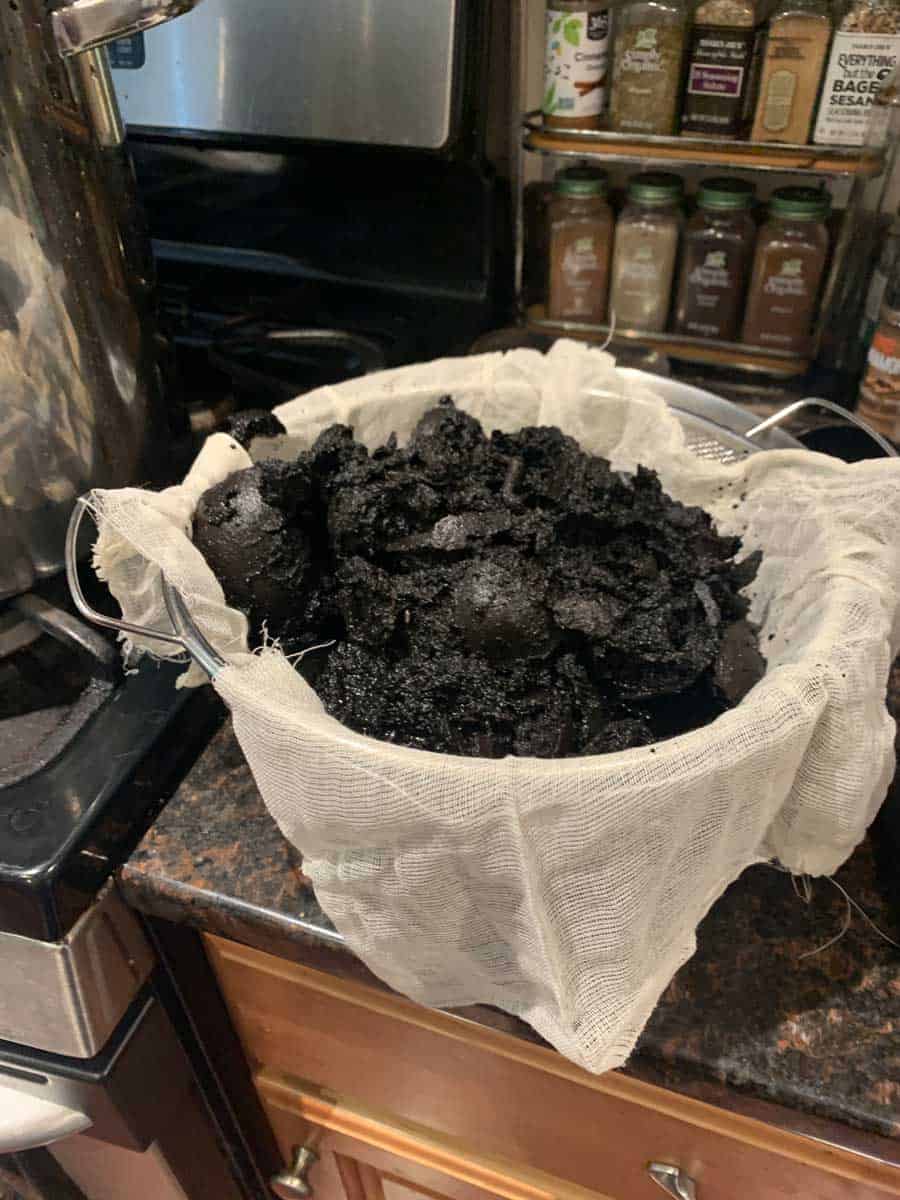 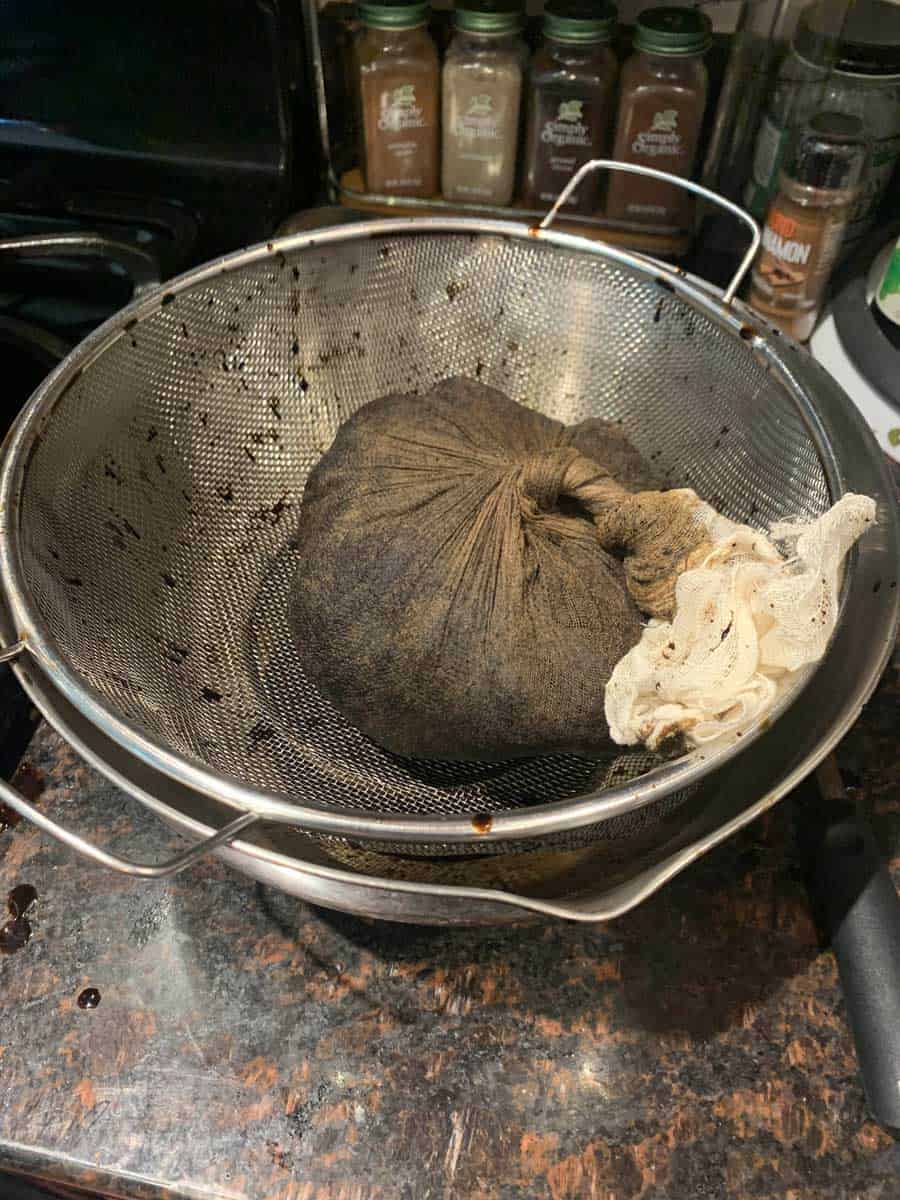 Walnut husks after squeezing out as much dye as I could.

Preserving Tips for the Ink

Once it’s reduced to where you like it, let the walnut ink cool down to room temperature. I poured the ink over a colander lined with cheese cloth again, to get extra sediment out.  I rinsed the one I already used, and reused it. Next, I ended up with about 3 cups of ink.  To help preserve your ink over time this is where you’re going to add in rubbing alcohol, this will help prevent the ink from molding. 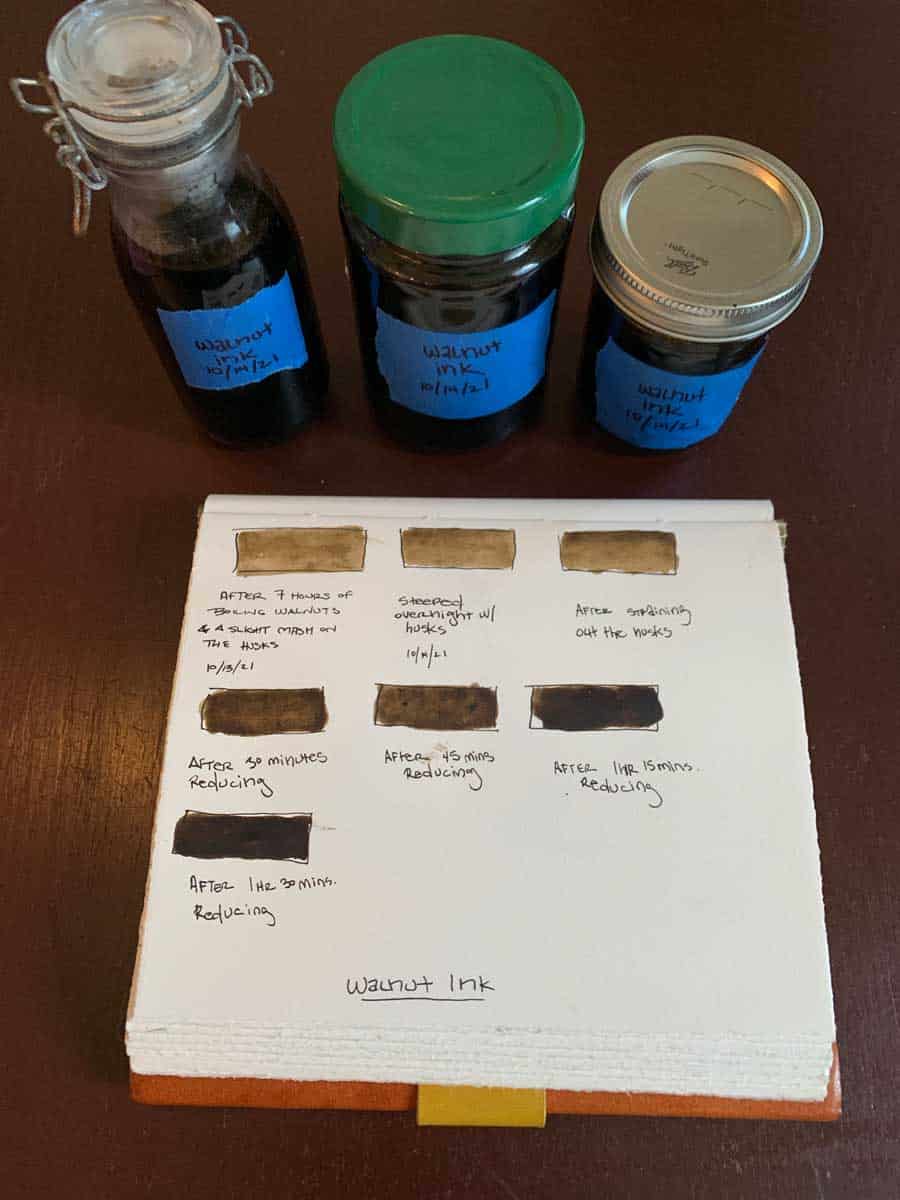 I checked the ink along the way see see how dark the walnut ink was getting. You can see its progress here, as well as the jars I used for storing my ink.

Also, I have a few jars of varying sizes so I just used what ever I had lying around, all that matters is that you have an air tight seal. Now when working with your ink you can use it as is, or John mentioned to me that it remains water soluble. You can use a bit of acrylic matte medium when working with it to help with that if you’d like.

I used the ink for this past Thursdays Illustration Isolation and it worked out great, it was perfect for painting old movie monsters! 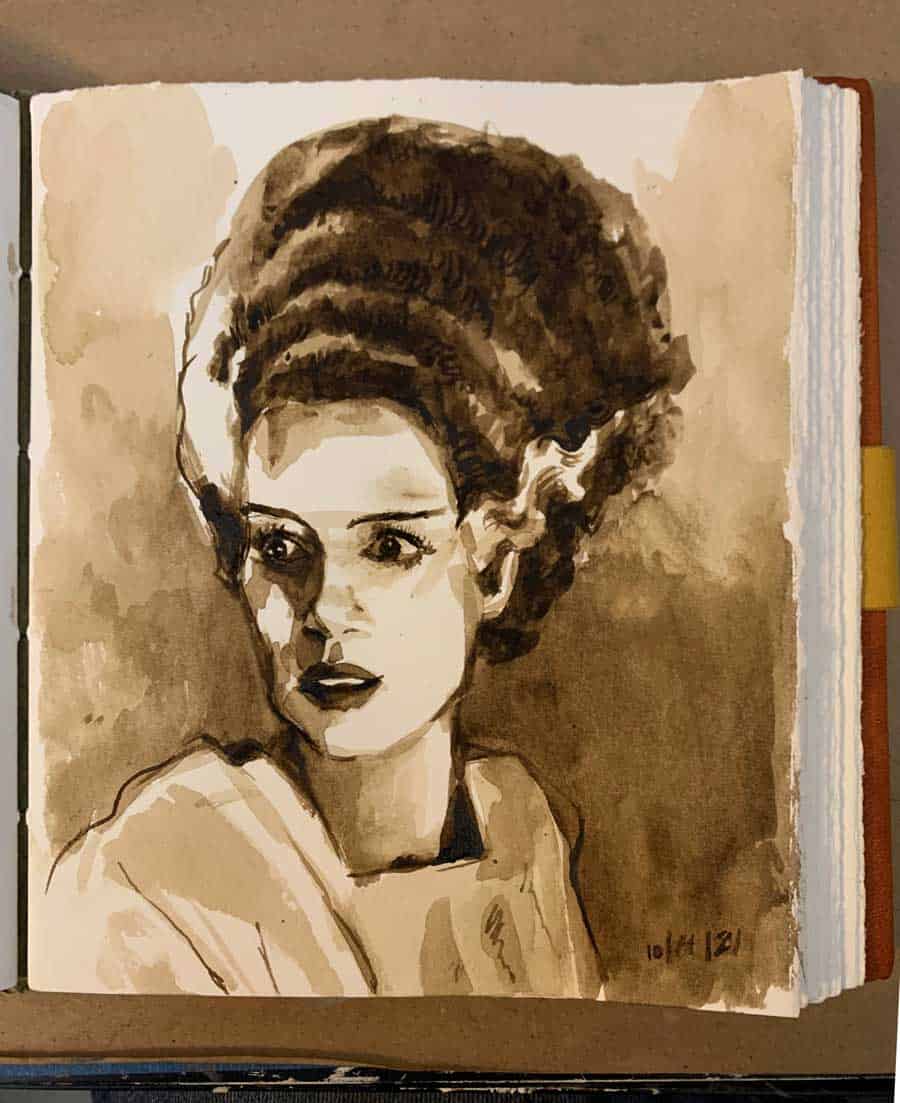 Bride of Frankenstein using the walnut ink for Illustration Isolation. 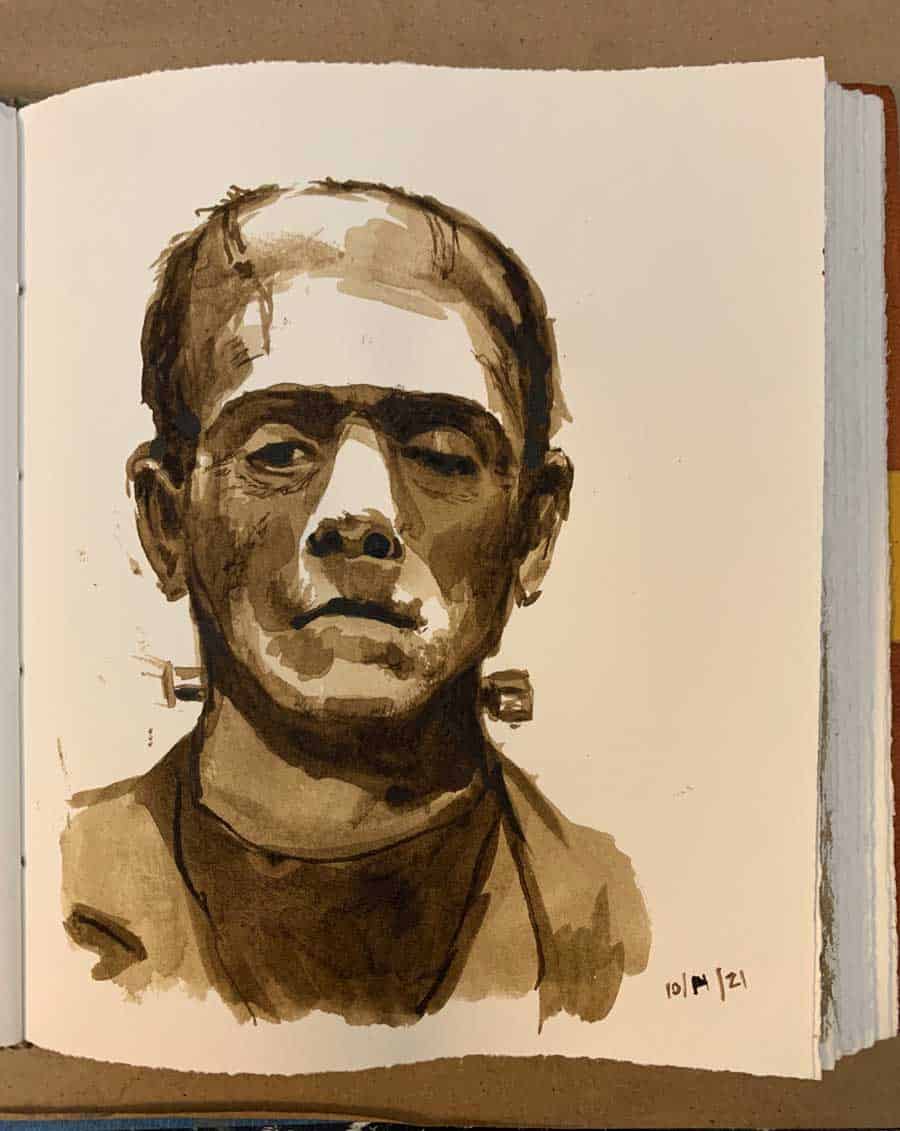 I learned a lot through the process of making my own walnut ink, and I’m happy with the end result, and who know maybe next I will churn my own butter… I saw it on The Great British Bake Off and it looked pretty easy. Have fun experimenting! If you follow my walnut ink making guide, please send us your results and let us know how it goes!

Making your own walnut ink is great ink for artists who are interested in drawing, calligraphy, watercolor, painting, and more. It is a fun and affordable alternative to store bought black ink or a bottle of Tom Norton ink. The process of making the walnut ink is not only a fun creative experience, but can give your art a unique sepia tone.

Want to learn more about our art mentorships?

Learn one-on-one from award-winning artists and develop a portfolio for the industry of your interest.

Develop your skills and learn one-on-one from high-caliber working artists in the entertainment & game arts industry.

Just looking to take a one-off class? These topic-based, 5-week long courses are the perfect option.

Comics and Sequential Art: Designing Your First Panel With Confidence
Scroll to top